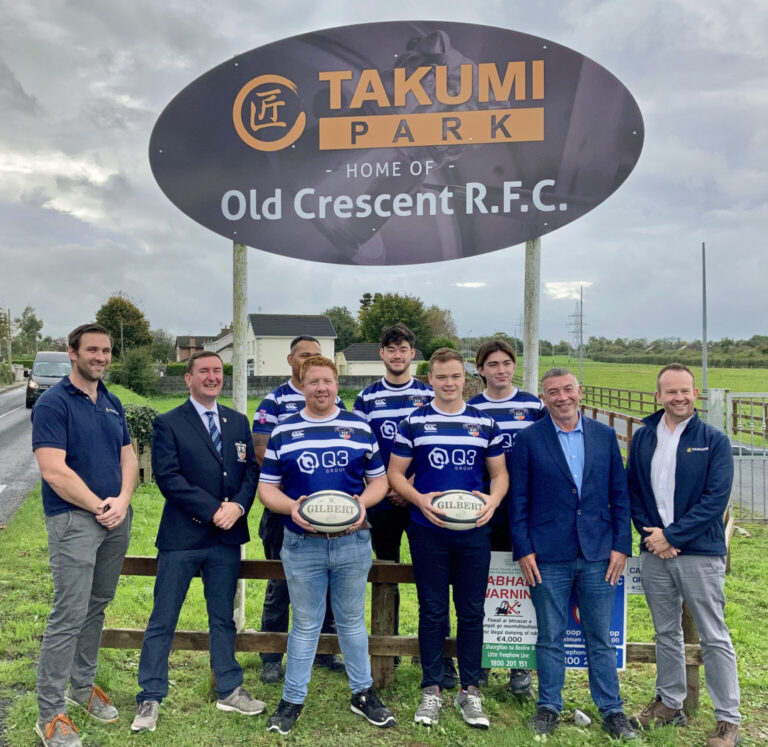 OLD Crescent RFC has announced that the Club has secured a major new sponsorship from Takumi, which will include the renaming of the Club grounds at Rosbrien as Takumi Park.

The sponsorship by Takumi, led by Old Crescent stalwart Gerry Reynolds, will support the ongoing development of the Club and its facilities and will secure the future of rugby for Old Crescent RFC at Takumi Park.

Founded in 1947, Old Crescent RFC moved to Rosbrien in 1974 and built its clubhouse in 1985. In a further major development in 2015, the Club doubled the size of its grounds to 25 acres by purchasing adjoining lands. The Club now has four full-size rugby pitches, additional training areas, and car parking for over 250 cars. Old Crescent RFC competes in Division 2A of the Energia All Ireland League.

Welcoming the renaming of the Club grounds to Takumi Park, Paul Donnellan, President of Old Crescent RFC, said: “We are delighted to welcome Takumi, led by our Club member Gerry Reynolds, as partners in the future development of our Club at Takumi Park. We have ambitious plans for our Club, both on and off the field, and it is fantastic that Gerry and Takumi share our vision for the future.”

“I look forward to this venture making a real contribution to Old Crescent’s success. Through the years, Takumi has evolved through investing in our people and facilities. We have a tremendous team culture in both Takumi and Old Crescent, and we attach great importance to the progression and development of team members.

Old Crescent has been part of my life since schooldays and underage and I expect that enhancing the facilities within the Club will create an environment where players and teams will strive for excellence and the Club in general will prosper.”

Takumi is a subcontract precision engineering business based in Raheen. The company has been operating since 1998 and employs 100 people. Takumi’s company culture is a fusion of Irish creativity and Japanese philosophy, following Gerry’s years of employment in Japan.

Takumi supplies precision-machined components for a variety of industries including medical devices, aerospace, pharmaceutical and semi-conductor. Takumi exports globally and the business continues its growth journey as it supports the needs of its customers.

Choosing Takumi as your Engineering Partner

Choosing Takumi as your Engineering Partner? we continue to forge international relationships with customers & suppliers, accelerating the growth & expansion of our business.

Takumi creating 60 new jobs at its facility in Limerick

Takumi creating 60 new jobs at its facility in Limerick and expected to double revenue.

Excellence is our ethos